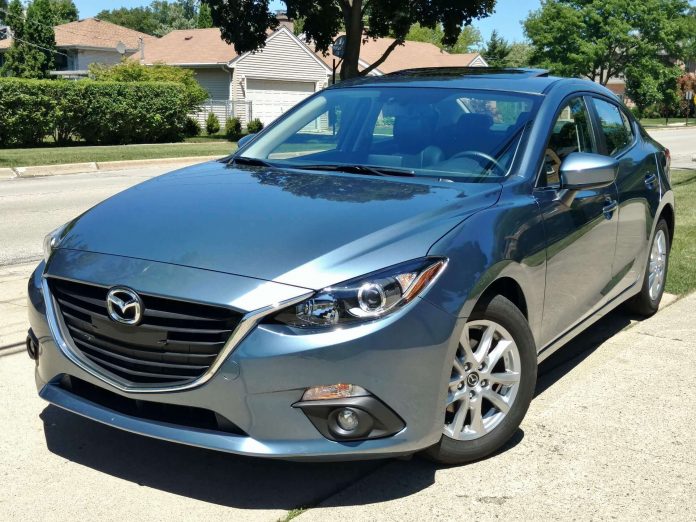 But that didn’t mean that small family cars couldn’t be attractive, well made, practical & efficient. And, at the same time, ENGAGING TO DRIVE.

WHY: For the more discrete look; Trunks are practical; JINBA ITTAI; DRIVING MATTERS.

WHERE MADE: Hofu, Yamaguchi, Japan

√ 7″-inch LCD media display is mounted high atop the center stack the better for every surrounding vehicle to gawk at; Never quite sure when to spin, depress or toggle center console rotary command controller;

HOW MUCH: $23,435 , including HDD GPS Navigation and BSW, Rear CTW. This year saw a much needed price drop and content increase across the Mazda3 line.

ANY COMPETITION: Volkswagen Jetta TSi , spiritual successor to original People’s Car. Not MCA exhibit worthy. Like the Mazda3 i, it has a fully independent suspension; (So do the re-designed 2016 Honda Civic and about to be discontinued Dodge Dart .) Jetta rides more compliant and has less fussy steering; However, Jetta’s manual transmission is somewhat sticky 5-spd offered only on lower trims; New Honda Civic sedan resembles a hatchback. It’s front seat comfort is narrow, with a steep bottom cushion, gauges distractively digitized. Despite Civic being a sweet handler, ride isn’t that forgiving, optional 1.5L turbo engine is slightly laggy, and steering wheel disproportionately large.