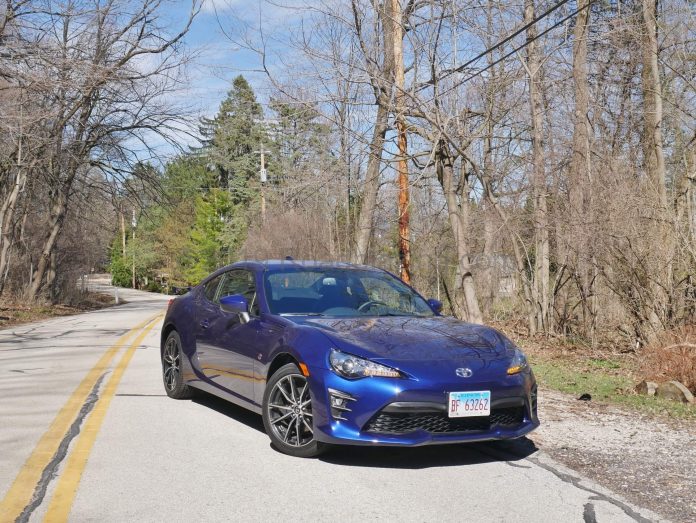 IN CONCEPT: The swept back silhouette of a front engine, rear drive fastback coupe is irresistible. The sensuous shape stimulates the visual senses.

Low mass, low center of gravity, just enough high revving power at the threshold of breaking the rear rubber loose, capable of controlled slides into and oversteer charging out of corners, a nimble steering rack, and confident stopping power tick all the right boxes of spirited movement.

IN PRACTICE: When the Toyota 86 GT, fraternal twin of the Subaru BRZ, has to account for itself, the fastback sports touring coupe has been cursed for ticking the right concept boxes.

Now in year 7 since the U.S. debut, with sales having tumbled from a launch acme, the Toyobaru  side, in particular, can’t avoid a power deficiency pooh-poohing.

With one review and a drifting video of the Toyota 86 as Scion FR-S under the belt of sister outlet, ChicagoNow.com “Drive…He Said,” Roadblazing.com now wonders aloud whether the 2019 Toyota 86 GT deserves more love than it gets.

– Infotainment makes a 1.0″ size leap but lags by two generations. There is the familiar looking in-dash Pioneer 7.0″ touch LCD head unit, simple to use, with all of one mobile app, A-Ha radio included. That means no Entune 2.0 apps here, although a HDD GPS navigation head-unit is a dealer offered accessory. Despite a 300W power rating the audio struggles to compete with the hoary flat-4 above 4000 rpm.

– In the interest of low mass front sport buckets are devoid of power adjustments. Slipping in and out denotes a definite door lean. Padding manages supportive though not suffocating. Fold and slide access to the back seat for two uncomfortable adults is limited to the passenger side.

– Prospective and perceptive Mazda MX-5 cross-shoppers should note the Toyota 86 has a real trunk. Two weeks’ groceries are no problem. The rear seat back folds for a couple carry-ons. There’s a real in-dash glovebox. Center console storage is deep enough for dual cup holders. Door pockets are included, too. One bad = the keyless start / stop module which consumes wireless device cubby space.

2019 Toyota 86 GT  = For the time being raw balance staves off calls for more power in this sports gt coupe!