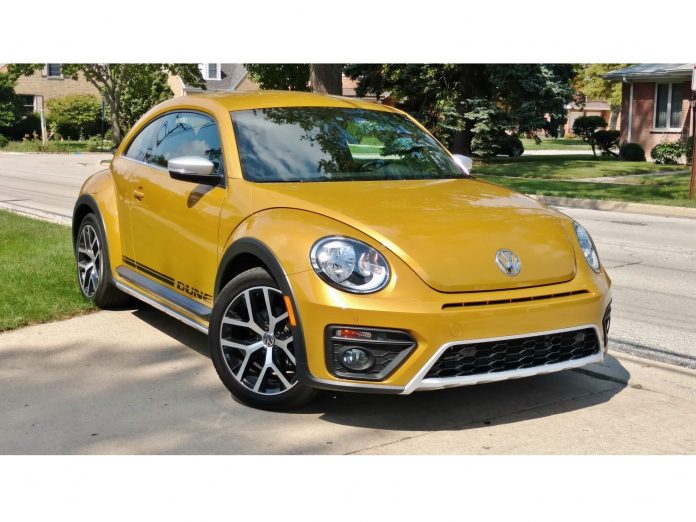 Cover art on political rock singer Neil Young’s 1974 album “On the Beach” prominently features a 1960’s vintage Cadillac buried nose first into a beach, with only the rear tail fins above the sand. That image along with lyrics “I see bloody fountains, and ten million dune buggies coming down the mountains…” heralds the decline of American traditionalism and the rise of the anti-establishment movement particularly on Southern California beaches.

The traditional donor for the “Dune Buggy” was an air-cooled engined VW Type I Beetle with greater suspension travel, thus AKA “Baja Bug.”

Recently automaker Volkswagen has confirmed what has been common knowledge for a while now. The new anti-establishment individualism in Southern California and pretty much elsewhere favors the Sports Utility Vehicle. Has the time has come to bury the Beetle nose first in the sand?

If one counts rolling over granules of remnant sand on the Highland Park Beach asphalt parking lot of Chicago’s Lake Michigan North Shore, Roadblazing.com occupants set off for beach adventures in a saffron 2017 Volkswagen Beetle Dune 1.8T. Staring wistfully at the sand, the sand glared back, “Real Baja Bugs only need apply.“

WHAT [A] STYLING [DIFFERENCE]:

WHY: A New Beetle which inspires dreams of Hanging Ten.

WHERE MADE: Puebla, Mexico

The tuned for compliance fully independent front strut control arm suspension, is a relic from Mk. VI Golf days; Longer suspension travel copes with the fractionally higher clearance;  With linear but numb steering, turn-in is ponderous and an abundance of understeer awaits; Yes it feels worlds’ behind the ability of the new MQB platform; Pedal reaction from 4-wheel disc brakes is somewhat daft; Slight wind whistle penetrates the frameless door windows into an otherwise placid cabin.

HOW FAR: 29 combined miles per gallon