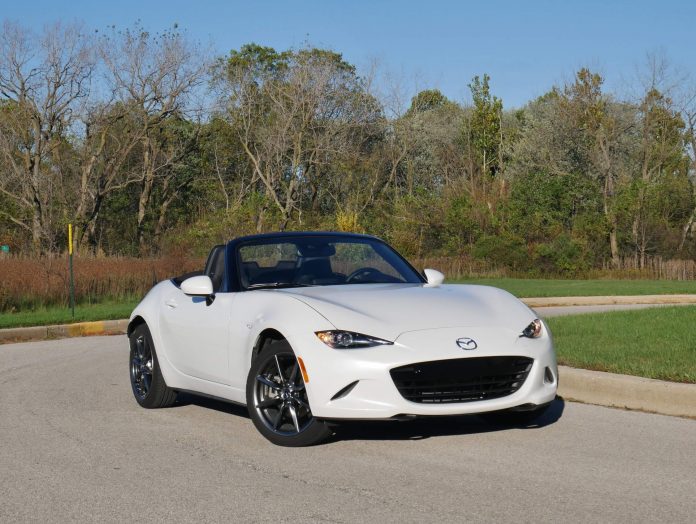 More than one century ago the earliest automobiles earned the nickname [or mockery] “Horseless carriages.”

In the years since, driving has developed into a less sensory, more automated human activity. Responding to the trend of motoring disconnect, in 1989 Japanese automaker Mazda arrived at the Chicago Auto Show responded with a roadster which embodied Jinba Ittai, where “Jin” = “rider”, “ba” = “steed” and Ittai = “unison.”

Between 1989 and 2016 three generations of MX-5 roadster  (series NA, NB, NC) found enough enthusiasm for an intimate driving car that 800,000 ended up leaving the Hiroshima plant. What has become affectionately known as the Miata also became the most competitively raced vehicle ever.

Strapping on helmets, Roadblazing.com delved into the real story for the 2019 model year Miata:

Retracting the light, durably framed soft-top is a one-handed / armed affair. Closing the roof is possible, though not at all suggested, at speeds up to 30 miles per hour.

WHAT (A) STYLING DIFFERENCE:

√ Trying to Be TR-7 rather than Spitfire: chiseled face and corners oust a formerly ovoid self;

WHY: What says unity of rider and steed better than a light roadster?

WHERE MADE: Hiroshima, Japan

There is balance in lightness afoot. The ND MX-5’s dramatic weight loss and from high tensile steels to aluminum doors and hoods. The front midship layout with powerplant well aft of steered wheels, claims an ideal 51:49% mass allocation.  Roadblazing.com can attest to brisk hot-laps at Road America in Elkart Lake, Wisconsin, with checked undesteer courtesy of the optional GT-S package’s limited slip differential.

Particularly in Grand Touring trim, the ND Mazda MX-5 is the proud beneficiary of plenty of premium Mazda sedan / crossover finish bits. The cockpit delivers on the twin cowl theme. The tiered dash-top is soft layered. Anything other than analog gauges would have been out of place, so the only digitization happens at the TFT color trip multi-function display. Switch gear is comprehensively simple, sized for ease of dexterity.