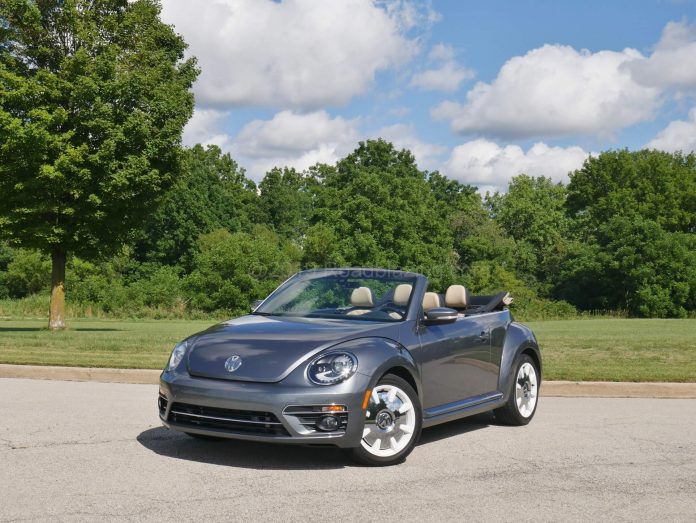 As the camera zooms out on the most iconic of retro personal coupes/ convertibles ever made, the 2019 Volkswagen Beetle Final Edition bids Adieu, Adieu and Au Revoir to an oft told automotive story about the classic People’s Car, dating back to 1938.  The Beetle or, interchangeably, Bug, Kafer or Vocho, has been that absurd little bird, and that made it so endearing.

Fueled by “Dieselgate” and an urgency to find SUV traction in the North American market, Volkswagen has already semi-pivoted to a new electrified, modular ID platform. There’s a more three-dimensional VW emblem on the way too.

The 2019 Volkswagen Final Edition Beetle boasts no special numberings nor commemorative plaques. Production was not limited by anything more than dealership book orders. Released in softer color schemes, such as the tester’s Platinum Grey with beige soft top, it lacks the sardonic impressions of last year’s comprehensively reviewed Beetle Dune.

There was a modest amount of fanfare on the Puebla, Mexico assembly line as the last Stonewashed Blue Final Edition coupe rolled off on July 10, 2019. Roadblazing.com now bids a sentimental farewell to a cultural icon whose epitaph will read “Over 21.5 million made,” Yet the misty eyed might find solace in the upcoming electrified VW I.D. Buzz, a retro nod to the vintage VW Type 2 Bus.

Roadblazing.com says Adio with one more open air spin in the Final Edition of the Beetle runabout, as this staffer reminisces of cutting his teenage driving teeth on a late 70’s air-cooled rear engine Type I.

– Ferdinand Porsche’s 1938 People’s Car design proved to be a runabout for the ages.

– The transition from New Beetle to current A5 Beetle in 2013 involved some manning up, with beefy fenders and rear haunches, more square jawed lower front fascia and a bumped out lower trunk lid to upper bumper cover line. Side running board keep with Type I tradition underlined by body-color matching side skirts. Front air dam corner straking and a rear cowl spoiler fills the sport quota.  LED versized ovoid front and segmented directional backs are the true spoils of a modern age.

+/-  Reviving a modicum of elegance are the SEL’s alabaster ringed mirror 18″ alloy wheels which can be likened to Roaring 20’s mobsters’ ankle spats.

– For a car intended to spend much of it’s life with roof open, the retro modern concentric dial gauges, with 3.5″ TFT monochrome MFD capable of displaying navigation routing, deserve better protection against the jaws of sun glare.

–  Beetle convertible’s trunk is at worst a handbag, especially when the tonneau cover  slumbers back there. An evenly split rear seat back comes to the rescue, reinforcing the Beetle convertible as a fun weekend getaway conveyance for…2. Utility exists in the upper and generous lower glove boxes. A lower center stack connectivity nook is straight out of pre-phablet times. Then there are the dash top bowl, twin cup holders, sub-arm rest bin. -1 Shallow door pockets strapped with an elastic band, presumably for paper maps.

– Contemporary 2.0 16V liter turbocharged engines spew out a lot more fire than the 174 ponies made by this de-tuned previous generation EA888. Is it permissible for Roadblazing staff to pine for the roiling torque of the non-compliant 2.0 TDI diesel tested by sibling outlet ChicagoNow.com “Drive…He Said?” This final Beetle won’t break rubber and the 6-speed Tiptronic is geared for a rather sedate cruise, delivering 30 miles per gallon.

The extra poundage of the Beetle convertible is a handful for body control on the old non MQB platform. It rolls without the punches and the rear end pushes a fair bit in turns. Road compliance has been calibrated for supple and steering sharpness excised. Even the disc brakes at all corners issue suggestions rather than commands.